Garry Gilliam had a difference-making touchdown catch in a playoff game for the Seattle Seahawks.  He wants to be a difference maker in his hometown as well.

Garry Gilliam had a difference-making touchdown catch in a playoff game for the Seattle Seahawks.  He wants to be a difference maker in his hometown as well.

Garry heads up The Bridge, an organization designed to transform old and abandoned buildings into centers that bring housing, education and nutrition into their communities.

To see what's being done at the bleacher gardens behind the old school building -- and contribute to the effort -- check out the pictures and info at https://pledgeit.org/the-bleacher-garden 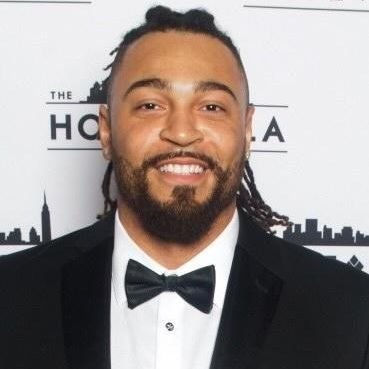 After a successful career in the NFL, former Penn State player Garry Gilliam has turned his attention to sparking change in his hometown of Harrisburg with The Bridge, Eco Village…eat, learn, live, work and play.
Garry is a former football offensive tackle. He was originally signed as an undrafted free agent by the Seattle Seahawks after the 2014 NFL Draft. He later played for the San Francisco 49ers. He also played college football at Penn State. He’s from Harrisburg and attended Milton Hershey School in Hershey.
Garry graduated from Penn State University with multiple degrees (Business Development, Psychology and Advertising), which he puts to good use in his post-professional football career. Garry is a prolific businessman who learned valuable business and life lessons on the football field that enhanced his character, perspective, focus and business acumen off the field. It was while playing with the Seahawks that Garry first channeled his vision for a sustainable, mixed-use community eco-system into what is now The Bridge Eco-Village in Harrisburg. When complete, The Bridge Eco-Village will feature solutions to many of the problems facing underserved communities: housing, retail, co-working spaces, education opportunities, entrepreneurship incubators, urban agriculture, sports and entertainment.
With plans to expand The Bridge model across the USA and Africa, Garry recognizes that ambitious plans for business expansion depend on meaningful collaboration, continued personal and professional development and the recognition that the businesses of the future must prioritize environmental, social and economic sustainability.