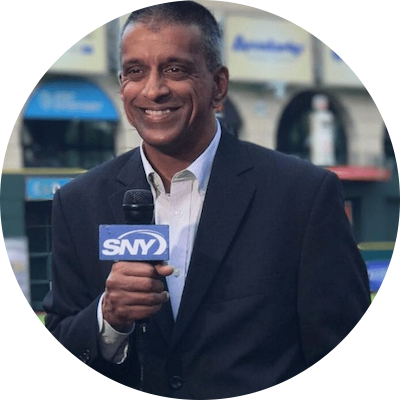 Sweeny Murti’s love of baseball began as a player in Little League, and was spurred by his childhood favorite team, the Philadelphia Phillies. Murti was in 5th grade when the Phillies won the World Series. His love for broadcasting began when he began calling football and basketball games for his high school, which just happened to have a low-power FM radio station on campus.
The combination of sports and broadcasting took him to Penn State to study broadcast journalism. His first job was in Harrisburg; then his career took him to Philadelphia before he relocated to New York and sports talk WFAN radio. His first stint at WFAN was in 1993; he spent a year back in Philadelphia in 1997-98 before returning to WFAN.
Sweeny is also a regular contributor to SNY and MLB Network. He has also been seen frequently on WNBC-4 New York, WCBS-2 New York, and YES Network. He also covered the 1996 Summer Olympic Games and 2000 Summer Olympic Games for Westwood One Radio Network.

Spring's on the way, time for baseball! Not so fast! Sweeny Murti says, once again, players and owners are having a moneyball problem.

A baseball team has lots of coaches. What do they do, and why are so many of them getting fired this year? Sweeny Murti talks about coaches, why minor leaguers are important, and what to expect this offseason.

John and Don are huge baseball fans, and so is Sweeny Murti of WFAN Radio and the New York Yankees. Listen in as Sweeny tells the Innertube boys about his hour with the boys of 61*.