Can we reverse climate change? Weather Channel meteorologist Carl Parker has some answers and ideas.

"A code red for humanity:" fire, floods, extreme heat, and a lack of ice at the poles. Can we reverse climate change? Weather Channel meteorologist Carl Parker has some answers and ideas in this Musical Innertube. Don and John just have huge electric bills.

For solutions, there’s this: https://www.drawdown.org/solutions/table-of-solutions 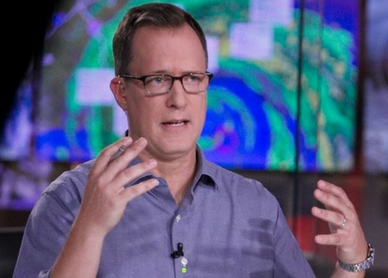 Carl Parker has been a fan of the skies for as long as he can remember. Even as a kid as young as five years old, he was fascinated by storms; he would look out the window for long periods of time, totally engrossed in the show. Parker would turn that childhood passion into a career, as a broadcast meteorologist for nearly three decades. And, self-admittedly, Park is still in awe of the drama and dynamism of a stormy atmosphere.

Parker joined The Weather Channel as an On-Camera Meteorologist (OCM) in 1999, and says it’s been very rewarding. Parker was an OCM for his first 12 years with the network, and then joined the Expert Team in 2011, where he can be found doing in-studio analysis for major weather events. Parker has also been focusing on extreme weather and climate change for several years, and after recently doing graduate work in that area, is now coordinating the network’s climate coverage. According to Parker, this is an issue that is already changing the way that weather works and he wants people to understand how, and also to know that there's a better way forward.

From 1995 to 1999, Parker was with KPRC-TV in Houston, TX, garnering both personal and professional experience with tropical storms and hurricanes. He covered Hurricane Georges and Opal from the field for KPRC, and would later chase powerful Hurricane Bret on his own.

Prior to Houston, Parker worked for WHTM-TV and WHP-TV in Harrisburg, PA, where he covered the Superstorm of 1993, a freak of nature that clobbered the Eastern seaboard. He began his career in 1991 at WTVA-TV in Tupelo, MS, while working on his B.S. in Geosciences at Mississippi State University. He also has a Graduate Certificate in Climate Adaptation from NC State University, and holds the American Meteorological Society’s Seal of Approval.