Nobody delivers salsa music like Alma Del Barrio, the weekend radio dynamo on KXLU in Los Angeles. Don and John talk with Alma founding member Kiki Soto about the show and the salsa.. 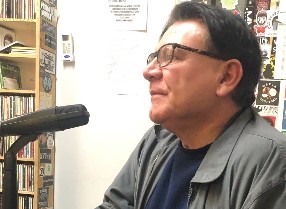 Enrique "Kiki" Soto is the co-founder of the radio program "Alma Del Barrio". Kiki earned a Bachelor's Degree and a Master's Degree in Business Administration before age 24, while simultaneously growing the radio program from 1 hour to 24 hours of programming. He has worked in Los Angeles at ABC-TV Network, ABC Production Studios, CBS-TV Network, KFWB News Radio, and KKGO-FM (Jazz). Kiki has worked in 4 different industries, as Assistant VP of Admin, Finance & Real Estate Development and Assistant VP of Budget, Planning, & Strategy. Kiki has served on various Boards including the Board of Governors of L.A. County's Economic Development Corporation. Kiki was a member of his high school's first soccer team (eventually becoming team captain), when his mother foretold his future by telling him "You're an Instigator."