And now, we present a soothing Musical Innertube

After a two-year hiatus, the San Diego Comic-Con returns in 2022 to hosting in-person attendees. Gary Sassaman tells tales of working for the Con, designing program books and organizing the programs listed in those books.

After a two-year, pandemic-imposed hiatus, the San Diego Comic-Con returns to hosting in-person attendees this year. Gary Sassaman tells tales of working for the Con, designing program books as well as organizing the programs listed in those books. 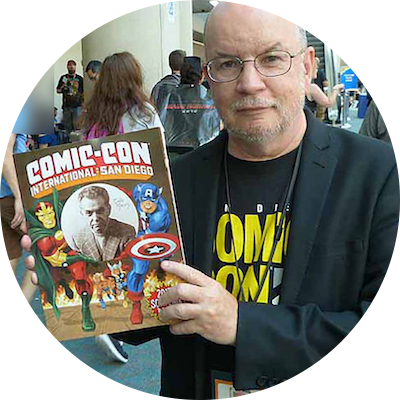 Gary Sassaman is a lifelong comic book fan. He dearly remembers the day in August of 1961 when his older brother walked in the front door with a copy of Fantastic Four #1 (yes, they still have it). In the 1990s, Gary created his self-published comics series, Innocent Bystander, which became part of Geeksville, published by Image Comics in the early 2000s. In 2000, Gary was hired by Comic-Con International: San Diego, the world’s largest—and most famous—comics and pop culture convention. Over the next 20+ years, he worked for Comic-Con as Director of Programming (2000-2007) and Director of Publications and Digital Media (2007-2021). He was involved with the start-up of the Comic-Con Museum in San Diego, curating its first two gallery shows, “The Art of Comic-Con 50” and “Sense of Wonder: The Art of WonderCon.” He is happily retired since 2021 and still visits his local comics shop every Wednesday.