He's been Pseudolus, Max Prince, and the one, the only, Groucho! Frank Ferrante talks with Don and onetime Philadelphia Inquirer theater critic John about his life in the theater and his evening as Groucho.

He's been Pseudolus, Max Prince, and the one, the only, Groucho! Frank Ferrante talks with Don and onetime Philadelphia Inquirer theater critic John about his life in the theater and his evening as Groucho, captured on film and playing on PBS.

Check it out at 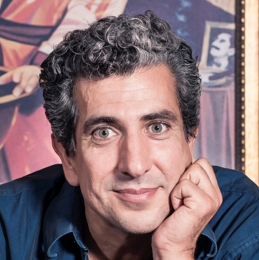 FRANK FERRANTE is the recipient of New York's Theatre World Award for 'Outstanding Debut,' a New York Outer Critics Circle nomination, London's Laurence Olivier Award nomination for 'Comedy Performance of the Year,' Washington D.C.'s Helen Hayes nomination and two Connecticut Critics Circle Awards. He was picked a 'top ten' theater performance by the Wall Street Journal in 2017 and in 2019 the Chicago Tribune picked him as a 'top ten' stage performance for his role in cirque's Teatro ZinZanni. His New York, London and PBS performances in the title role in Groucho: A Life in Revue received not only acclaim from critics and audiences but from the Marx family.
Ferrante was discovered by Groucho Marx's son playwright Arthur Marx as a 22 year old drama student at USC performing An Evening With Groucho for a 1985 senior project. Arthur subsequently cast Frank to portray Groucho Marx for the heralded 1986-87 production of Arthur's Groucho: A Life in Revue that played Off-Broadway at the Lucille Lortel Theatre for 254 performances. Ferrante, who was 23 at the time, portrayed legendary Groucho from age 15 to 85. Morrie Ryskind who co-wrote the Marx Brothers classic films Animal Crackers and A Night at the Opera and attended Ferrante's USC show said, "Frank is the only actor aside from Groucho who delivered my lines as they were intended."
At the Walnut Street Theatre, Ferrante is the in-house director of many of their stage comedies including critically acclaimed revivals of Neil Simon's Brighton Beach Memoirs, Biloxi Blues, Broadway Bound, Laughter on the 23rd Floor (1997 & 2017 in which Ferrante also starred), The Sunshine Boys and Lost in Yonkers which was a co-production with Miami's Coconut Grove Playhouse and a 'critic's choice.' In 2017, Ferrante directed and performed the lead role Pseudolus in the Stephen Sondheim musical A Funny Thing Happened on the Way to the Forum and his performance was picked by the Wall Street Journal as one of the top ten in the country receiving kudos from Sondheim himself. In 2019, Ferrante starred in and directed Ken Ludwig's A Comedy of Tenors in the lauded Walnut Street Theatre production collaborating with playwright Ludwig on the production.