The Musical Innertube - Lori Serratelli and the CASA Program

The Christmas season is a time for giving - and this season, you have the opportunity to give and support people who have been giving of themselves on behalf of foster kids all year.

The Christmas season is a time for giving - and this season, you have the opportunity to give and support people who have been giving of themselves on behalf of foster kids all year.  Listen as Lori Serratelli tells the story of CASA,

Get your virtual ornament at dauphincountycasa.org/tree. 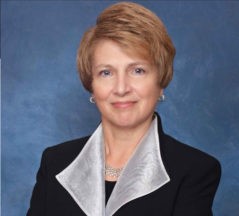 Lori K. Serratelli has accomplished much over her career as a family and employment law attorney for over 40 years. In June 2016, she was honored with an appointment by the Governor and confirmed unanimously by the Pennsylvania Senate to the Dauphin County Court of Common Pleas where she served in the Family Law Division and presided over Orphan’s Court and civil litigation matters. Her appointment ended January 1, 2018 when she returned as “of counsel” to the firm she originally founded to handle complex family, Orphan’s Court and employment matters.

Former Judge Serratelli offers services in mediation and arbitration in the areas of family matters, Orphan’s Court and employment matters.

She has lectured extensively on employment discrimination and family law matters and has been a participant, presenter, and advocate for sexual harassment training programs. She also has experience as an independent sexual harassment investigator on behalf of employers.

She has served on various Boards of charitable and non-profit organizations and is a trained CASA (Court Appointed Special Advocate) in Cumberland County. She has been instrumental in developing the Dauphin County CASA program and serves as Vice Chair of the Board of Directors of Dauphin County CASA and is a member of the Board of Directors of PA CASA. She was appointed by the Governor in January of 2018 to serve on the Victims Advisory Committee of the Pennsylvania Commission for Crime and Delinquency.

After earning her B.A. in English from the University of Vermont in 1975, Ms. Serratelli received her Juris Doctorate from Capital University Law School in Columbus, Ohio in 1978. During her time in law school, she co-authored a law review article on child support issues. She was admitted to practice before the Pennsylvania Supreme Court in 1978. Subsequently, Ms. Serratelli was admitted to the U.S. Third Circuit Court of Appeals; the United States Supreme Court; U.S. District Court, Middle, Eastern and Western Districts.